Bits From Slouching Toward Fargo

Judging by the 70 pages I’ve read, Slouching Toward Fargo is a real winner.

Journalist Neal Karlen, the writer, had this tidbit about Patrick Reusse:

While a cub reporter, I'd seen Patrick Reusse at what I believed was his drunken, meanest, most vile worst. It was spring training 1984, and I witnessed him cruelly mock for the amusement of a gaggle of other cackling beat sportswriters the tortured on-field contortions of a young Minnesota Twins outfielder named Jim Eisenreich. At the time, everyone in baseball thought Eisenreich was a head case comparable to Jimmy Piersall or a young man with the worst case of on-field stage fright that any sportswriter had ever seen.

In fact, Eisenreich's on-field spasms and hyperventilations weren't caused by nerves, it turned out later, but by an undiagnosed case of Tourette's syndrome. The ballplayer eventually recovered his career, but I'll never forget the look of unrestrained bully on Patrick Reusse's beet-red face as he mocked at Jim Eisenreich's torment.

Since then, Reusse had publicly gone dry. He'd also grown obese, immense, a circus fat man with a poison pen. His own problems had not made Patrick Reusse any more kind to those of others; his columns grew ever more vicious after he was sober.

For another treat, here’s a picture early in the book of Dave Stevens, Darryl Strawberry, and Daryl Henderson: 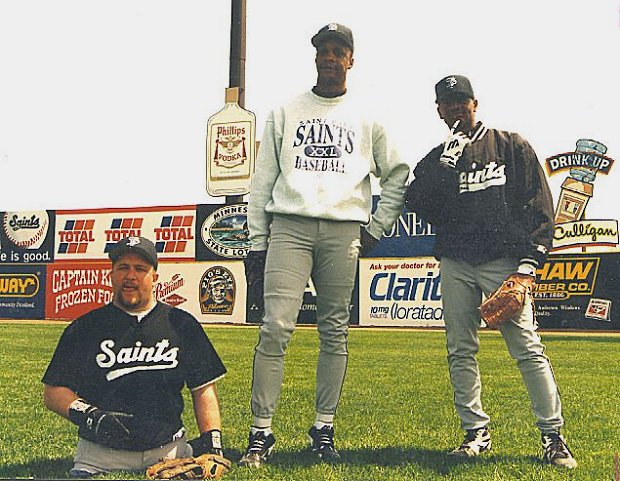 Dave Stevens, the man with no legs, played one game at second. For more good pictures relating to the book, check out the Northern League Fan site.